The Arenas de Barcelona? Awesome. And That's No Bull 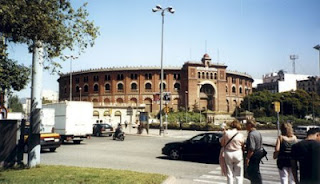 How better to shun bullfighting and incentivize commerce than the new idea behind the Arenas de Barcelona Commercial Complex located just off of Plaza España. If you're coming on the Aerobus from the Barcelona Airport you can’t miss it if you are looking out the left-side windows. The Arenas de Barcelona formally re-opened to the public on the 25th of March, 2011, after several years of construction and development. As much seen throughout Europe, in attempts to preserve historic monuments by breathing new life into them, this highly impressive structure is a perfect example of old meets new. Gone are the days of bullfighting fanaticism, this 100-year-old historic brick landmark has been re-invented and has been given a second chance - housing (you guessed it) shops, restaurants, cafes, and offices. It’s a majestic shopping complex, it really is. Eager to gobble up the limited retail and office space have been companies such as Zara, Mango, Calvin Klein Jeans, and Vogue, among others. There is even a mechanical escalator, located in the center of the complex, taking you to the rooftop terrace with stunning 360-degree panoramic views on the city. 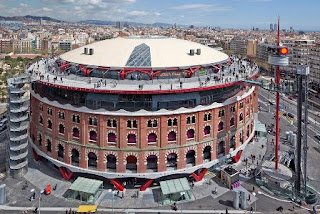 So back to the building, this commercial complex, which retains the entire existing Modernist façade, was designed by the famed British architect Richard Rogers in collaboration with Alonso Balaguer-Arquitectos Asociados. As Roger explains, “The approach for the bullring uses the most advanced architectural and engineering technologies in response to the brief, while respecting and celebrating the fabric of the historical bullring to re-establish the building as a visually striking landmark for the city. The most spectacular aspect of the intervention is the inclusion of a 100-metre-diameter habitable 'dish' with a 76-metre-diameter domed roof, floating over the façade of the bullring – and structurally independent from it – providing flexible, column-free spaces beneath the dome. This covered 'plaza in the sky' incorporates large terraces around the perimeter with space for cafes and restaurants, providing stunning views over the city.” (Rogers Stirk Harbour + Partners LLP. “Las Arenas,” 2013. http://www.richardrogers.co.uk/work/all_projects/las_arenas/concept.)

Arenas de Barcelona has become, in the last few years, a great tourist and architectural attraction - bringing new life to that area of the city. Most recently, it housed the 2nd Annual Barcelona Beer Festival, which I attended and was a true delight. It’s definitely worth a visit if eating, drinking, shopping and sightseeing are on your agenda.


Posted by Javier Castillo at 7:25 AM No comments: