Once in a blue moon I get a craving for a uniquely tasting beer. It doesn’t happen often. I have grown complacent with my standard macro brew, drinking just for the sake of drinking, drinking without any real critique to taste; without giving much attention to flavor or finish. And, when I do get that rare craving for something premium, I simply head over to the limited selection of foreign brews at my local supermarket 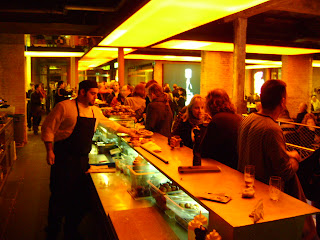 and pick out a nice, special 6 pack of the delicious golden beverage. Premium beers are good in the bottle, sure, but there is something to be said about beer on tap, and there is certainly more to be said about beer on tap at say a “beer factory”. That’s right "beer factory", or as they call it here in Spain, "fábrica de cerveza". I don’t think a beer could taste any better than at its fountainhead and place of origin, and that’s exactly what I discovered and proved to myself last week at Barcelona´s new hot, and recently-reopened (after 10 years of renovation), Fábrica Moritz Barcelona located in the Raval area of Barcelona at Ronda de San Antonio, 39

<- View of the high-end bar in the back 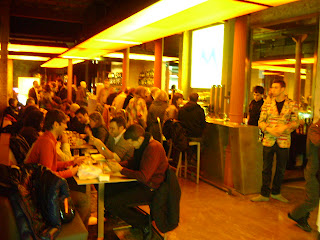 Moritz beer has been a Catalan favorite for well over 150 years (the brand was created in Barcelona in 1856, Moritz Beer) and its elegant, smooth and crisp finish can now be enjoyed accompanied by a variety of gastronomical treats at this great new spot. On tap is the golden original, brewed with Saaz hops (generally used for Bohemian style lagers and Pilseners), giving it a tasty and slightly sweet malty flavor. Another darker variety called "Epidor" is also on tap for those in the mood for a stronger tasting beer. At the far end of the factory you will find a high-end restaurant and bar offering the freshest of seafood - oysters, crab, mussels and other delights. Not impressed yet? There is also a wine bar (to open on January 16), a beer tasting bar, a small museum, and
View from the entrance of the beer factory ->
various interactive social spaces for conferences and corporate events. There is also a bakery in the works. The building - thanks to the architect - has preserved it´s exquisite original foundation while easing into a newer, more modern makeover. As for the staff – they are alert and attentive; making the experience at this happening gastronomical and cultural center one-of-a-kind in Barcelona. One friendly staff member in a Moritz-patterned blazer (see photo above), actually guided me through the downstairs area that they plan to open in roughly 2 or 3 months as a large-scale restaurant. Don’t be surprised if the wait for a table at the restaurant takes a longer than you expected, queues can form, especially during the after work hours and on weekends. If that’s the case I suggest you grab a cold one at the bar, mingle with the locals and merrily drink your time away. Cheers! 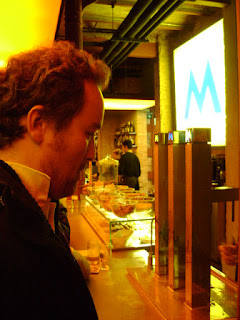 At the bar with a true beer connoisseur and future brewer, Charles Adams, indecisive at the options before him.
Posted by Javier Castillo at 1:04 PM